What is an Alphabet?

We’ve looked at several writing systems in this blog series, but not all of them are true alphabets.  An alphabet is any set of symbols, or letters, set in a fixed order, and used to represent both the consonant (hard stops) and vowel (soft breaths of air) sounds of a language.  For instance, our Roman Alphabet with it’s twenty-six letters set in its a•b•c•d•e•f•g•h•i•j•k•l•m•n•o•p•q•r•s•t•u•v•w•x•y•z order.  Each letter represents a phoneme, a small unit of sound.  Each letter then becomes a grapheme, or the smallest written symbol for a phoneme.

An alphabet is a most useful technology.  It allows us to communicate over great distances and even very long periods of time through our writing.  Historical records and scientific discoveries can be written down for future generations of people to study and learn.  Family stories, names, dates, and other important data can be preserved.  Journals are kept to remember our most special moments.  There is a tremendous amount of information and ideas shared through the means of an alphabet.  People from distant parts of the world and very different cultures can learn about one another.  We may never know who the first inventor of a writing system was, but we do know the concept of an alphabet greatly affected people and civilizations everywhere.

The Vimala Alphabet order differs from the familiar A•B•C order.  Instead, the letters are organized by the qualities that mark our own unfolding abilities that we acquire as we grow and mature.  From our natural “baby” self, full of curiosity and movement, to our older contented self of having accomplished much, the letters work and play together just like people do. 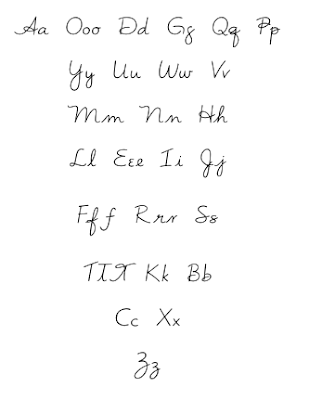 As movement is mastered, the pen forms familiar shapes that represent small units of sound.  These small units of sound, or phonemes, become graphemes, or letters.  Our Roman Alphabet Letters are full of movement.  There are lines and curves and angles in the different letters.  Joining letters together, we make words that tell a story or communicate something.  The Vimala Alphabet, a handwriting system that is very fun to write.  It’s casual and simple with a basis in Sacred Geometry.