Cuneform began with pictures pressed into clay tablets.  Later wedge shapes replaced the pictures.  Can you see why this was nicknamed 'nail writing?' 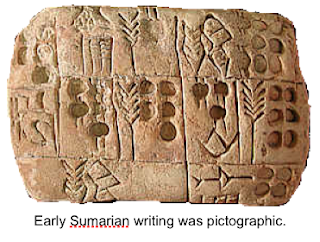 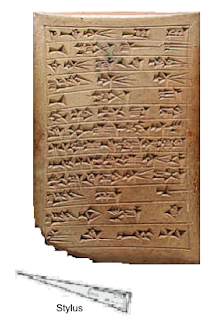 'Nail writing' developed using the tip of the stylus, a wedge pointed writing instrument that could make impressions easily on the clay.  The wedge shapes replaced the pictures.  Cuneform served two very different languages in Mesopotamia, Sumerian and Akkadian.

Children who were lucky enough to be chosen to be scribes had to sit on the ground for hours practicing how to make the signs with their stylus on wet clay tablets.  It was an honorable job to be a scribe, yet it was not an easy one.


To learn more about the history of writing and writing systems, read Dorling Kindersley's Book - an Eyewitness Book.  It is a filled with wonderful illustrations and rich in historical insights about the people who created and used scripts from ancient to our own modern times.  It's a great resource for all ages and a good conversation starter to discuss the impact writing has had on cultures over time.  Ask kids what they think about different scripts and how writing has evolved throughout different cultures and over time.

Posted by Alphabet, Pen and Ink at 1:26 AM No comments:

A History of Writing ... Egyptian scribes

The Egyptians developed a form of writing that was chiseled or engraved in stone.


This writing was not really a true alphabet, but rather a pictography, a set of symbols called hieroglyphs. Hieroglyph means sacred carving.  The pictures may have represented the actual objects shown or they may have been a symbol for the beginning sound of the things pictured.  Sometimes they worked like a rebus, a picture puzzle that uses picture words to sound out the real word intended.

Elaborate pictograms were engraved and painted on great stone monuments or walls.  A simpler form of writing called hieratic was used to write on papyrus, a kind of paper made from water reed plants.

Great kings and other important people had their names written as a cartouche.  The letters of the name were written or inscribed vertically, top to bottom, and circumscribed with an oval outline.  The example below simply says “name”.

No one knows for sure how the Egyptian language sounded.  We transliterate the symbols into our own alphabet for convenience only.  Many scholars believe the Egyptians carved pictures to represent their ideas before attaching sounds to the symbols.  It was only later that they chose some of these pictures to actually represent the hard sounding consonants in their language.  Using fewer symbols that actually represented these sounds made it much easier to master reading and writing. 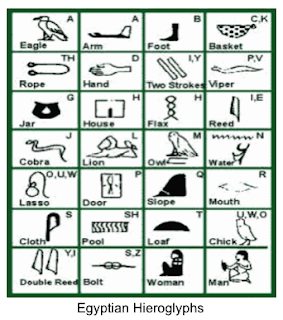 Eventually the Egyptians learned how to make paper to inscribe a more simplified form of writing.  In ancient Egypt, most writing was reserved for priests and temple scribes.  They drew with a kind of brush made from the same reed plant used to make their paper, the Papyrus plant.  Their writings are called Hieratic.

Hieratic means sacred or priestly.  Hieratic writing was simplified for use in record keeping and preserving information in texts.  Eventually hieratic writing evolved into demotic, an even simpler cursive form of writing that served the wider population for administrative purposes.  Later still, the Greek Alphabet was adapted for use with the Egyptian language, and became a writing system called Coptic. 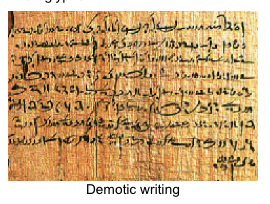 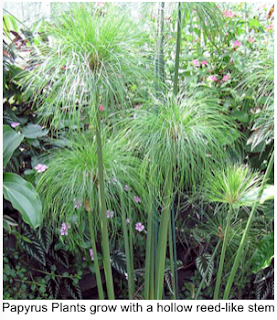 Posted by Alphabet, Pen and Ink at 3:30 PM No comments:

Writing Through the Centuries ...

Writing through the Centuries

Thousands of years ago there were no pens or pencils or paper.  When ancient people wanted to leave messages, they had to carve them on wood or stone.  The landscape around them was their point of reference.  One of the early systems of “written” symbols were actually notched lines on tree branches or sticks that the Celtic (pronounced “Kel-tik”) people carried with them or left staked in the ground as signs.  Their alphabet was called the Ogham (pronounced “oh - yum”)  Sometimes these letter symbols were carved on stones or large rocks also.  Originally there were only twenty letters, all consonants.  Five more, representing vowels, were added sometime later.  Each letter was named for a tree and stood for the first sound of its name.  This Alphabet of lines was also used to “speak” with sign language.  The Celts used the fingers of one hand laid across their nose or across a leg to spell out messages they didn’t want strangers in their midst to understand.

The Runic Alphabets also related to trees.  Each letter was called a Rune, and stood for a particular tree as well as a sound.  The letters were ordered by the trees’ seasons. There was an Elder Futhark and a more simplified Younger Futhark.  Both were used for the Proto-Germanic and Norse languages.

Another Runic Alphabet was used for the Anglo Saxons, but they related their letters to a broader index of nature, rather than just the many trees of the Futhark Runes. 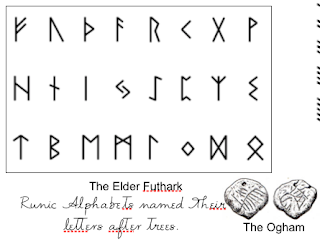 The Chinese people used eight sets of three lines each as symbols for things.  These were the eight basic tri-grams.  They combined these in sets of two to make up sixty-four more symbols of six lines each called hexagrams.  As the solid and broken lines shift for each symbol, they represent the ever changing nature of life.  The story goes that Emperor Fu-Hsi saw a turtle coming out of a lake, and the eight tri-grams were revealed to him from the patterns on the turtle’s shell.  Then the eight tri-grams produced the sixty-four hexagrams with six lines each.  Later still a calligraphy form of the symbols was created.  This was a more artistic ideographic system that enlarged the original sixty-four symbols into hundreds of signs.  The original sixty-four hexagrams are still recognized today as the contents of the I-Ching (pronounced “E-ching”), or Book  of Changes, which is often used as a form of fortune telling. The I- Ching is really a book that talks about the continually changing nature of life and how opposite things weave a pattern of becoming and dissolving.  It’s like the mountain that eventually wears away into the valley below; or the lake that gradually dries up and becomes a desert.  In time, the mountain will rise again; and rains will drench the land so that the desert fills up and becomes a lake once more. 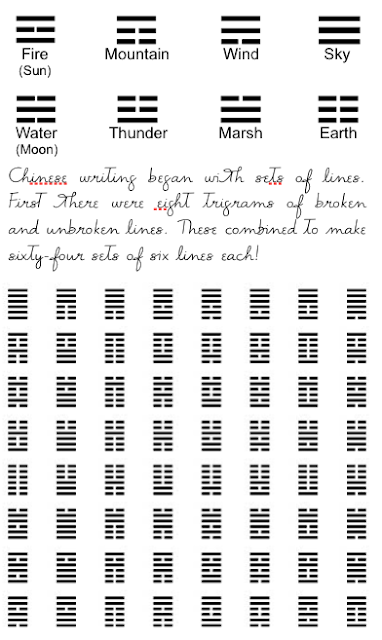 Chinese symbols represent whole words or ideas, and are therefore not a true alphabet.  Chinese ideograms are both beautiful and complex.  A brush and ink are used to create the artistic and flowing symbols that are drawn from top to bottom.  China’s characters have evolved over time from simple lines into an intricate writing system with many hundreds of symbols.  Each row below shows a Chinese character evolving.  There are many dialects in the Chinese language making it difficult or impossible for people from one region of China to understand people from other different regions.  Although the spoken language may not be similar or understandable between regions, the Chinese people can “read” the meaning of what’s written in Chinese no matter which dialect they speak. 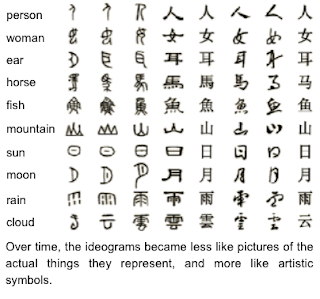 Posted by Alphabet, Pen and Ink at 1:30 PM No comments:

A Word About Ligatures

A ligature is a combination of two or more Letters that flow together in such a way that an ending portion of one letter forms the beginning of the next.  These are fun to practice.  The one that is the most common in people’s handwriting is the ligature

a ligature stands alone in a word, neither touching the letter before or the one after it.  “The whole is greater than the sum of its parts” is a truism that applies to ligatures.  By combining two gases, hydrogen and oxygen, we get a completely different liquid, water.  Similarly, each ligature has its own distinct flavor or personality.

You can see some frequently used ligatures below.  Practice a few for fun.  How does it feel?  Can you find all the ligatures in the paragraph below? 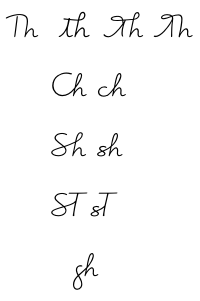 Posted by Alphabet, Pen and Ink at 3:49 PM No comments:

There is so much that can be said about the Alphabet and handwriting.  Fluidity of thinking is strengthened as we employ healthy handwriting strokes along with many other psychological aspects involving the hand-brain connection.  The Vimala Alphabet letters were created to engender forward thinking; finding the solution in the challenge by always ending to the right, to the next step, the next moment, the future outcome.

Let your letters open your mind to healthy, constructive thinking patterns.  Most of all enjoy your writing!  Take time to journal.  Make time to write a letter or a note to someone who would enjoy hearing from you.  Keep a little scrapbook with all your best practice pages.  The best way to learn more about the letters is to practice them!  The letters will enrich you.  Keep notes on what you think and feel.  Let your pen flow across the page with an easy rhythm, and write several lines of your first initial every day.  Find out more about the animal that represents this special letter.  The first initial of our first name plays in our lives.  See what gifts or challenges yours brings, and have fun with it.

May the blessings of 2020 bring you success and happiness as this new decade begins!
Posted by Alphabet, Pen and Ink at 3:59 PM No comments: