Before Pens and ink ….

Writing has come a long way since its beginning, when people had to use a hammer and chisel to carve their letters.

Engraving or carving Alphabet symbols on walls of stone was the work of artists.  Only the most holy priests and scribes could perform this important task.  Such detail work required skill and patience.  Special pointy and blunt edge tools called chisels were used with a hammer to chip out the stone surface in the pattern of the writing.  Some scholars believe this is why these early writings read from right to left.  Since the majority of people are right handed, meaning that their right hand is stronger and more skilled than the left, they used their right hands to wield the hammer against the chisel which was held with the non-dominant left.  It made sense to work across the rock face inching the chisel leftward after each hammer blow from the right hand.  This kept the pattern of symbols in clear view as the scribe carved.  When people started using just one tool, a brush or a stylus, to draw images on parchments or wax boards, they continued writing from right to left.

Finer tools were needed to write on wax boards and scrolls.

The Greeks and Romans used a metal stylus to make letter impressions on their wax boards.  Both ends could be used for different effects.  The wider end could also be used to smooth out mistakes much like the erasers at the end of our modern pencils rub out our own errors in writing.  Bone and ivory were also used to make styluses.

When pens were adopted, people sometimes wrote in boustrophedon fashion, moving across a page one way, then turning their letters backwards and writing across in the opposite direction.  Finally, when inks came into use, our Roman letters became fixed in one direction, left to right.  Since most people are right handed, it was easier to keep the right hand in front of the pen so they could write without smearing the ink. Left handed writers can avoid smears too, by positioning their paper properly.  Right or left (and most especially for left-handers), line the paper up with the elbow of your writing hand.

With the invention of the reed pen, people could use ink to form finer letters.  Reed pens were made from the hollow stems of certain plants like papyrus.  A writing point was fashioned and the hollow stem was filled with ink.

Quill Pens are made from the flight feathers of large birds.  Feathers have a hollow shaft that holds the ink.  The best pens came from feathers plucked in early Spring.  Goose feathers were most common.  Swan feathers were the most expensive.  Crow feathers made very fine lines.  Turkey, eagle and owl feathers could all be used.  It takes time and skill to trim and fashion a pen.  Writers had to be careful of the fragile writing point, or nib.  If someone was very good at it, they could trim the same feather four or five times before having to discard it.  The term “pen knife” came from the little knife used to trim the nibs.  A quill pen was used to write our Constitution, and for signing it as well.

While our modern fountain pens are completely fashioned of stronger, manmade metal parts, they follow the same principle as the original reed pen.  Care must be taken that they don’t leak.

Brushes are still in use today for Chinese writing.  Brush writing is an art form and lends itself to the writing systems it serves.  Pencils with lead points offer the ability to rub out mistakes.  They are much less expensive than pens or brushes, and won’t leak like a fountain pen, but they lack the finer qualities that facilitate cursive handwriting.  The ball point pen seems the perfect solution to giving a lovely trail of ink without those troublesome leaks.  Even so, some folks still prefer the beautiful quill. 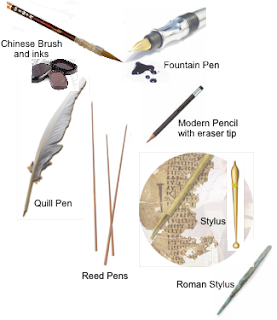