Can you read the paragraph below?

Literally, it reads (translated left to right with spaces, but no punctuation):

Papers and parchments were scarce and expensive.  Nothing went to waste.  Often people would deliberately wash and fade pages, turn them in a perpendicular direction and reuse them, writing over the previous writing.  They also wrote in the boustrophedon style shown above.  Leonardo Da Vinci wrote like this.  It was most confusing until it was finally decided that every line of Roman Alphabetical writing would begin at the left side and end on the right side of the page.  Finally, when spaces between words and punctuation were added, it became much easier to read and understand what was written. 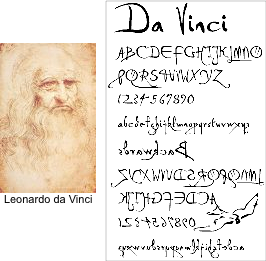