Numbers played an important role in the invention of writing

Writing is really a most valuable technology.  Did you ever wonder how it all started?  People several thousand years ago didn’t have pencils or pens or paper or even ink!  In some places they would carve notches or symbols on rocks or trees to tell other people something important like how a place was used or where to find some drinking water.  Then when settlements formed with larger groups of people living together like in our modern towns and farming communities, people began to trade for the things they needed.  There wasn’t any money like we have now, so they would have to trade for real things like a sheep for a basket or some seeds for wool to make a blanket.  With lots of things being traded, a system was needed to keep records.  That’s why people started writing things down.  At first they would make a little hollow ball or oval egg shape out of clay, and mark a picture of what was being counted; then they put some small stones inside, one stone for each thing being counted.  The little ball of clay would be sealed. One day someone decided to use a symbol to mark the number for easier reference.  Later someone realized that pictures could represent sounds, not just things.  That way people could have a more complete written record to help them remember.

Counting and accounting in Mesopotamia


Clay “envelopes” like the ones pictured at left and below are thought to be the precursors to ancient cuneform writing.  There is a lot of disagreement among scholars, but some think these little balls of clay that hold small stones and clay figures were used to keep track of things traded and kept in inventory. 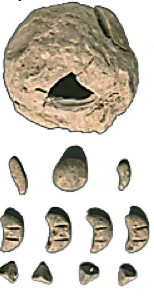 From numbers of clay pieces to pictures to numerals to writing ...
Each little stone or clay figure represented a certain item.  Different shapes represented different kinds of items, like sheep or baskets of wheat.  Someone figured out that it was much easier to press the little clay figure into the ball of clay so that it didn’t have to be opened to see what was being counted.  Then a numeral symbol was created to see how many things were inside without having to break it open.  People realized they didn’t need to keep track of all the little pieces anymore.  Instead, they could just use pictures and numerals.  The pictures were simplified further into groups of wedge marks that could be made with a pointed stylus.  Scholars nicknamed this writing “nail writing” because of the way it looks.  What do you think of the samples on the next page?  Can you see the nail shapes?